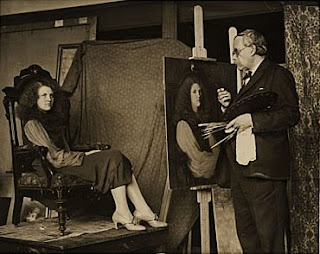 Philip Leslie Hale . 1930
Lilian Wescott Hale was "always successful, right from the start. Her husband, Philip Hale, told with pride how, at the openings of exhibitions of even her earliest genre paintings and those charcoal drawings for which she had developed a sharpened-point technique wholly her own, one Boston dealer used to put up a velvet cord across the entrance until the cream of the buying cream had had a preliminary view. When the cord was taken down, every picture in the show would have been sold."

Lilian's proud husband, "Philip Hale, was an important member of the Boston School of figure painters and one of the most innovative of the American Impressionists. He was also an influential and prolific art critic, recognized for his insightful writings on Impressionism and other aspects of modern art, as well as for his monographs on the seventeenth-century Dutch painter, Jan Vermeer. Hale’s talents also extended into the realm of teaching: for over thirty years, he was one of the most popular instructors at the school of the Museum of Fine Arts in Boston, his pupils including such noted painters as John Lavalle and Will Barnet."* That is where he met Lilian. Even though he was seventeen years older, they had married and had a daughter, Nancy. Nancy adored her father, was delighted by his stories, and shares a number of them in her book, The Life in the Studio. 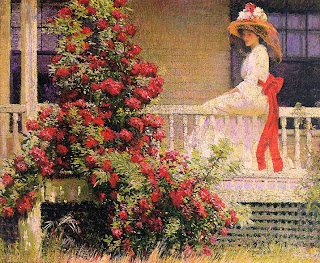 Philip Leslie Hale was the son of a well-known minister, the Reverend Edward Everett Hale. Hale began painting and drawing as a child [see his sketchbook at age 13], encouraged by his mother and by his aunt, Susan Hale (1833-1910), a respected painter, author, and editor. His earliest artistic success came in 1883, when he designed the cover illustration for the March 9th issue of the Harvard Lampoon.

Upon graduating from Roxbury Latin School in 1883, Hale decided to pursue a career as a painter. However, he was not permitted to undertake formal study until, in compliance with his father’s wishes and family tradition, he had first passed the entrance examination to Harvard University. Upon doing so, Hale spent a year at the Museum School (1883-84), after which time he went to New York, studying at the Art Students League under J. Alden Weir and Kenyon Cox."* Then he took off to Paris to study art. He stayed for fifteen years. As his daughter Nancy tells:

"As I walked along beside my father on the way to school, he used to tell me stories of his Paris days. Once my father made the decision to go to Paris, he was left, by his father, to his own devices. He supported himself there almost wholly by copying Old Masters; it brought a certain income from tourists who wanted to take a picture home from Europe without paying very much for it. He stayed a long time in Paris.

A photograph of him at that time shows him lounging sidewise in a chair; his head is thrown back dashingly, but his eyes are anxious. He must have felt he had to be a success, after staking his judgment against his father's. When he came back to America, about 1895, a show of his paintings at Durand-Ruel's caused a sensation with their pure Impressionism. He never followed up his New York success, however. He went back to Boston.

I loved his evocations of a life, carefree in its poverty-strickenness, among the camaraderie of the ateliers, the cafes, the hole-in-the-wall lodgings of the Left Bank. My father lived with two friends, in the Rue des Saints-Peres, in a garret reached by a ladder nailed against the wall, up which he professed to have been able to climb carrying a lighted lamp and pitcher of water. Since my father was in Paris during the eighties and nineties, those stories of his were much like the life in Trilby and La Boheme.

When my father told those stories, his face lit up with laughter and his eyes sparkled. I had the strong feeling that he was poised for flight. At any moment he might take off, leave my mother and me for that life I imagined on the other side of the world.

At the same time, I was well aware that my father would do anything I wanted. Once as we were walking along I was taken by a wild flower, and my father, in his clothes for going to town and his hard straw hat, lay down on his stomach on the tar sidewalk, reached under the fence, and got it for me. 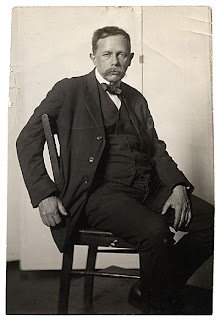 Philip Leslie Hale (1864-1931) **
I have a memory of how my father's studio looked in a painting of his that was lost from sight many years, found and then exhibited in the fiftieth anniversary re-enactment of the famous 1913 Armory Show. As I viewed it, my father's picture burst upon me in radiant floods of light as if I had never seen it before.

Against the great studio window Carrie [the model] stands, flourishing a gauzy scarf through which she is revealed, posed as though dancing. She is looking down at her feet; her face is hidden by a pompadour of clinging, coppery hair. Beyond the studio window, in full sunlight, rises the pink brick steeple of a church. Inside, a big pier glass of the kind painters use to view their work in reverse makes a balance to the church in the composition. And reflected in the mirror - tiny, tiny, so that it is no wonder the director's description of the painting, based on a photograph, didn't include it - stands the figure of my father painting the picture.

Even so minutely, it shows the father I knew- his characteristic painting stance, legs apart; the white shirt sleeves and stiff collar he always wore; the walrus mustache; the same melancholy eyes. The picture's title in the catalog was, simply, "Nude"; but suddenly I remembered - I can't imagine from where, it must have been from earliest childhood because I hadn't even remembered the picture - that my father's old, joking name for it was "The World, the Flesh, and the Devil." It seemed like a portrait of my father.

Looking at the sad little face in that picture full of sun, I was able at last to admit to myself that my father had really not been a gay man at all, but a retiring man who assumed ebullience to cheer himself up, and to get along in a world he had no instinct to overwhelm. The things in his life he picked out to actually do, or not do, prove how he sought and clung to safety in the bosom of his tiny, adoring family. He loved the art of painting, and what he really wanted was to be at home quietly with my mother.

'Aren't you ready to go yet?' my mother said when I rejoined her at the far end of the gallery. 'Don't you want to go and look at Papa's pictures one more time?' I said. ' I hate to go away and leave them.' 'I know every picture your father ever painted by heart,' she said. Her belief was always that my father was perfect - a great, unappreciated painter. It was no surprise to her when, toward the end of the Armory Show, the nude was bought by a gentleman in the Middle West. What she said was, 'It's about time somebody had a look at all that wonderful technical skill. All that training. Nobody has any training nowadays.'"***


* http://www.spanierman.com/Hale,-Philip-Leslie/bio/thumbs/biography
** from Smithsonian Archives of American Art, collection donated by Tom Dunlay
*** from The Life in the Studio by Nancy Hale 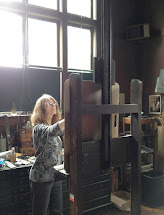